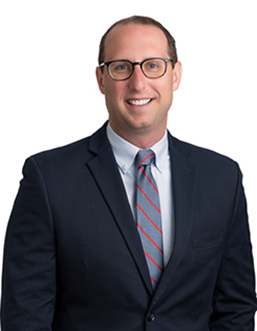 David also has thorough appellate knowledge and understanding, having formerly served as a Judicial Law Clerk for the Honorable Roy L. Richter and the Honorable Lisa P. Page on the Missouri Court of Appeals, Eastern District.

David is very active and engaged in the St. Louis area. In 2018, David was elected to the Webster Groves City Council. In 2020, David was elected as the Democratic Committeeman to the Jefferson Township. For almost a decade, David has served on the Board of Payback, Inc., a local non-profit that promotes and fosters restorative justice for youth charged with non-violent crimes.

Outside of the office, David enjoys spending time with his wife, Annie, and his large extended family. David loves to bike, cook and play any board game.

David was a clerk with the Honorable Roy L. Richter and the Honorable Lisa P. Page, both of the Missouri Court of Appeals, Eastern District.